Grupa LOTOS and LOTOS Paliwa will obtain EU funding for their project to construct hydrogen purification and distribution units and two hydrogen refuelling points (in Gdańsk and Warsaw) as part of the Connecting Europe Facility (CEF). The project, worth almost EUR 10m, is to be placed in service in 2021.

Grupa LOTOS and LOTOS Paliwa will obtain EU funding for their project to construct hydrogen purification and distribution units and two hydrogen refuelling points (in Gdańsk and Warsaw) as part of the Connecting Europe Facility (CEF). The project, worth almost EUR 10m, is to be placed in service in 2021.

The ‘Pure H2’ project submitted by LOTOS was placed on the list of projects approved by EU member states in late September and supported as part of the CEF instrument (specifically in the 2017 CEF Transport Blending MAP Call II). This means that almost EUR 2m, i.e. approximately 20% of the project budget, will be provided by the EU.

The objective of the project is to launch the sale of ultra-high purity hydrogen (99.999%) which could be used primarily as a fuel in public transport vehicles. Hydrogen allows vehicles to cover the distance of as much as 450 km without the need for additional charging. The use of hydrogen also makes it possible to spend less on additional power grid infrastructure. The project envisages the construction of a hydrogen purification unit at the Gdańsk refinery and a hydrogen sale and distribution station in the immediate vicinity of the LOTOS Group’s plant, as well as two refuelling points (in Gdańsk and Warsaw). 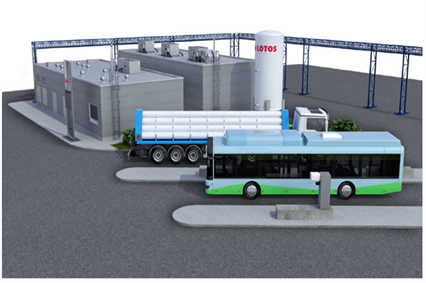 Project vision for hydrogen refuelling stations for vehicles and trailers

The Company considers the project a long-term one, as confirmed by the letters of intent signed between the Company and the municipalities of Gdynia and Wejherowo. Both documents provide for the supply of hydrogen to power buses with fuel cells.

At present, the Grupa LOTOS refinery in Gdańsk produces about 13 tonnes of hydrogen per hour, and its hydrogen output will exceed 16.5 tonnes per hour once the EFRA Project is completed. The average passenger car consumes 1 kg of hydrogen per 100 km, while during the entire year a hydrogen bus consumes the amount of hydrogen produced by Grupa LOTOS units within one hour. Those quantities refer to hydrogen that has not yet been purified – hence the need for a purification unit.

Purified hydrogen can be used not only in road transport, but also in IT, medicine and the food industry. As at today, ultra-pure hydrogen still needs to be imported and is therefore not widely used.

Pure H2 is not the only project to be financed under the CEF programme. Since the launch of Grupa LOTOS’s new strategy for 2017–2022, the Company has been participating in four large projects financed under the Connecting Europe Facility. Since 2017, Grupa LOTOS and Gaz-System have been preparing a feasibility study concerning the construction of a small-scale LNG terminal in Gdańsk and the construction of innovative small LNG bunkering vessels. The expected completion time is 36 months. The EU funding for the project will amount to more than EUR 1m, or 60% of the project budget.

Another initiative supported as part of the CEF programme is LEM (LOTOS Electro Mobility) – a pilot implementation of electromobility along the TEN-T network. LOTOS Paliwa is currently completing the construction of 12 electric vehicle charging points along the A1 and A2 motorways, between Tricity and Warsaw, in both directions. The EU funding for the project is more than EUR 400,000, i.e. approximately 40% of the project budget. In a longer-term perspective, LOTOS plans to install electric vehicle charging points at 50 of its service stations located on main throughways. Approximately one third of them will be located at motorways and expressways (Motorway Service Areas) across the country.

LOTOS is also actively engaged in other projects related to the sale of new generation alternative fuels, such as CNG and LNG. In January 2018, Grupa LOTOS and Remontowa LNG Systems signed a letter of intent regarding the construction of a pilot system for LNG distribution. The agreement provides for the design, construction and testing of a pilot LNG docking station. The main task of the station will be to maintain safe process parameters of intermodal, cryogenic LNG tanks over long periods of time. Remontowa LNG Systems has developed a concept for using LNG containers to bunker ships through a complex system of valves and pumps set in a frame the size a 40 ft container. The project will receive funding under the CEF programme.

The future of alternative fuels

The development of the alternative fuels market, supported by Grupa LOTOS, is vital for Poland, primarily because it offers the chance to gain a competitive edge in a new area of the European economy. This is a great opportunity and also a chance to create a new branch of economy and a sector of sub-suppliers of key components. Grupa LOTOS sees the scientific potential of Polish universities and businesses, which are already supplying many components to global majors. At the governmental level, this opportunity has been recognised and highlighted in the Sustainable Development Strategy prepared by Prime Minister Mateusz Morawiecki as well as in the Electromobility Development Plan and the Development Directions of Energy Innovations, a document prepared by the Ministry of Energy.

Under the Strategy, Grupa LOTOS will strive to become a leader in new generation fuels. In order to turn these plans into reality, in September 2018 representatives of Grupa LOTOS and LOTOS Lab, which is the entity responsible for initiating, coordinating, financing and implementing R&D projects at the LOTOS Group, signed documents initiating a joint R&D project with the Warsaw University of Technology. The project will be to prepare the prototypes of selected equipment for low emission transport and energy storage.

To meet the increasingly stringent environmental requirements in maritime transport, LOTOS is also running a project which will help increase the share of low emission fuels thanks to using LNG as bunker fuel. In addition to the cooperation with Remontowa LNG Systems, in April this year LOTOS Asfalt and PGNiG Obrót Detaliczny signed an agreement on joint offering of ship bunkering services using LNG from the Świnoujście LNG Terminal. The agreement has a commercial and environmental dimension and will also allow the LNG Terminal in Świnoujście to expand its commercial operations.

In addition to its purely business efforts, Grupa LOTOS S.A. is taking measures to raise the awareness of the use of hydrogen in transport. Last year, the Hydrogen Technologies and Clean Energy Technologies Cluster was established on the initiative of Grupa LOTOS S.A. Its mission is to initiate efforts aimed at increasing the importance of hydrogen technologies. The Cluster and the Gdańsk Regional Chamber of Commerce are the organisers of the first Polish Conference on Hydrogen Technology (PCHET 2018), to be held in Gdynia on October 25th 2018.

LOTOS is a Polish corporation whose business is of strategic importance to the national and European energy security, as well as to Poland’s economy. It produces natural gas and crude oil in Poland, Norway and Lithuania. The company owns a refinery in Gdańsk, one of Europe’s most advanced oil refining plants, where crude is processed mainly into high quality fuels, including the LOTOS Dynamic premium brand, as well as aviation and bunker fuels.

LOTOS also operates a chain of close to 500 service stations conveniently located at motorways and expressways, in all large cities and many other locations across the country. As a retailer and wholesaler of fuels, it has nearly a one-third market share at home. It is also Poland’s second-largest railway carrier. LOTOS is a leading manufacturer of road bitumens, engine oils and lubricants used in road vehicles, aeroplanes, trains, ships, and even military vehicles.