In late March 2020, Grupa LOTOS, LOTOS Paliwa and Remontowa LNG Systems signed an agreement to build a pilot LNG docking station, to be sited at the LOTOS service station located in Gdańsk-Osowa on the ring road bypassing the Gdańsk-Gdynia-Sopot metropolitan area (on the road to Gdynia). Its commercial operation is slated to start in mid 2021.

““As we battle the coronavirus pandemic, we care to ensure continuity of the day-to-day operations of our companies. This improves our chances of swiftly returning to business as usual and gives us hope for quick economic recovery in the near future. Innovation will be a key element here,” said Jacek Sasin, Deputy Prime Minister and Minister of State Assets.

Grupa LOTOS maintains its commitment to growth through innovation. We want to strongly emphasise it in this challenging time ofthe coronavirus pandemic. We make and deliver our products to customers with no disruptions and we support the emergency services in the battle against the coronavirus while working on new projects,” stated Paweł Jan Majewski, President of the Grupa LOTOS Management Board. “The project is implemented in partnership with Remontowa LNG Systems and it will enable LOTOS Paliwa to expand its offering to include LNG and CNG as modern, alternative, economical, low-emission fuels designed primarily for heavy road transport.Projects of this type are an important direction for us, one we will actively pursue. 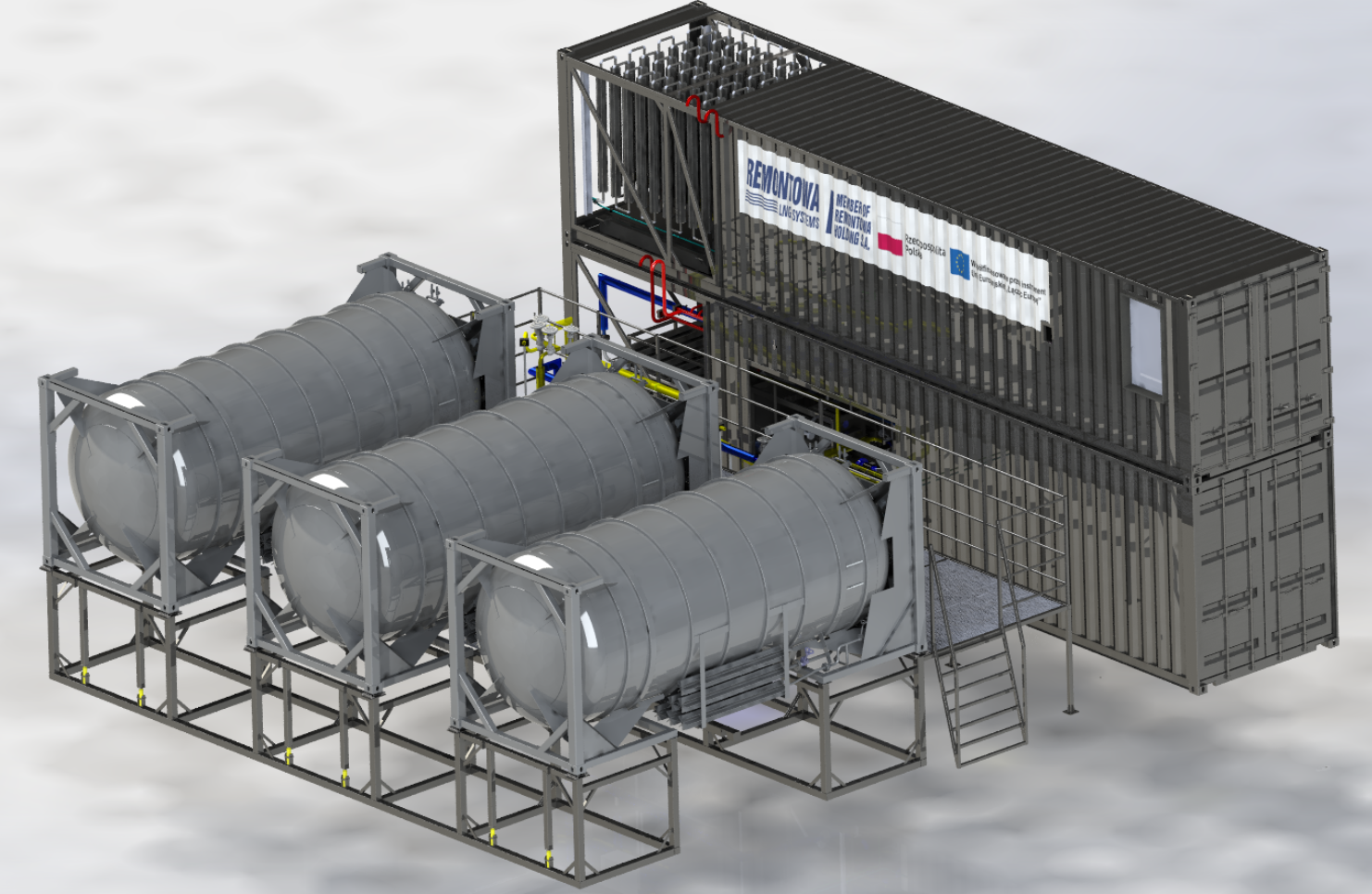 As its main function, the station will enable refuelling of vehicles powered by LNG and CNG. The cryogenic condenser will enable boil-off gas to be liquefied and re-injected into the tank container, helping the station to reduce methane emissions to zero during operation. Furthermore, automatic control and monitoring systems will enable single-person operation and remote servicing of the docking station.

Its unique function will be maintaining the technical parameters of LNG stored in the intermodal cryogenic tank containers at safe levels for a long time in order to enable distribution of LNG to end consumers by any mode of transport.

“I am glad we are about to launch a solution designed by Polish engineers and made in Poland. What pleases me most is that the station will be built in the Gdańsk region with the best partner we could wish for – LOTOS, the leader of innovation in the fuel industry,” said Piotr Dowżenko, President of the Management Board of Remontowa LNG Systems of the Remontowa Holding Group. “By implementing this project, we are deploying several extremely demanding technologies, expanding our range of LNG solutions and entering the onshore market with technologies we have previously used in the offshore industry,” Mr Dowżenko added.

The docking station will be located at the LOTOS service station at ul. Spacerowa 50 in Gdańsk-Osowa and will be operated by LOTOS Paliwa. Building the facility in the proposed location will contribute to developing transport infrastructure along a TEN-T route. The project will help to create an LNG distribution system in Gdańsk, with its footprint extending to Gdynia (as a TEN-T urban node), the Gdańsk Province and beyond (no LNG fuel sources exist in Northern Poland today). Besides its function as a service station, the facility could be used in the future as a virtual LNG pipeline hub and serve as the key to modern LNG distribution in Poland and abroad.

Initial assembly work is being carried out and training is being delivered in various fields, including the application of multilayer insulation (MLI), which, interestingly, is used in the space industry as well. Almost all required components, some of them hard to find, have already been acquired. With the contract signed, design work and procurement process completed, the project has moved into the formal arrangements, construction and commissioning phase.

Co-funded by the EU under the Connecting Europe Facility (CEF), the project comprises the design, construction and pilot testing of an LNG docking station.

LOTOS is a Polish corporation whose business is of strategic importance to the national and European energy security, as well as to Poland’s economy. It produces natural gas and crude oil from deposits in Poland, Norway and Lithuania. The company owns a refinery in Gdańsk, one of Europe’s most advanced oil refining plants, where crude is processed mainly into high quality fuels, including the LOTOS Dynamic premium brand, as well as aviation and bunker fuels.

LOTOS also operates a chain of more than 500 service stations conveniently located at motorways and express ways, in all large cities and many other locations across the country. LOTOS is a retailer and wholesaler of fuels, with a close to one-third market share at home. It is also Poland’s second largest rail freight forwarder. LOTOS is a leading manufacturer of road bitumens, engine oils and lubricants used in road vehicles, aeroplanes, trains, ships, and even military vehicles.

Remontowa LNG Systems sp. z o.o. is a member of the Poland-based REMONTOWA HOLDING Group. Established in 1945, the company has been specialising in the production of LNG supply systems since 2013. It is the sole company in Poland and one of the few companies in the world manufacturing LNG fuel systems for installation on board ships. Remontowa LNG Systems sp. z o.o. also makes heat exchangers, steam and water boilers, tanks, refrigerators, heaters, condensers, and steel structures. It was responsible for fabricating and delivering a complete LNG supply system for the Samsø ferry (its name was later changed to Prinsesse Isabella), the EU’s first LNG ferry, built and delivered to a Danish shipowner by Remontowa Shipbuilding S.A. of the REMONTOWA HOLDING Group in 2014.

General
Grupa LOTOS has announced its financial results for the first quarter of 2021. The company reported operating profit for the period of PLN 664.3m. Despite challenging conditions triggered by the pandemic,...
General
The Polske Filmdager 2020 Festival will feature a mix of film screenings, bilingual discussion panels, meetings  with artists, as well as exhibitions and concerts intended to promote Polish culture...