On March 7th 1971, a decision was made to commence construction of a refinery in Gdańsk. Over four years, on a 220 ha site a modern refining plant was built, designed to process 3 million tonnes of crude oil annually. The refinery was to supply fuels and lubricants for the Polish economy. The first batch of crude oil was loaded into the refinery storage tanks in 1975, and then the Fuel Unit was started up.

The programme for increasing the use of chemicals in the national economy (1968-1972) provided for significant development of the refining and petrochemical industry. The construction of a new refinery offered an alternative to the costly imports of petroleum products from the West. The project was to be located in the north of Poland, and was to be accompanied by the construction of a marine oil terminal, where crude transported by sea was to be unloaded. A number of locations were considered. Eventually, Płonia Mała, situated east of Gdańsk in the fork of the Martwa Wisła river and the Rozwójka canal, was selected as the proposed plant site.

Based on documents prepared by the Oil Industry Design Office of Kraków (later renamed Bipronaft), on May 7th 1971 the government adopted a resolution on long-term purchases of crude oil and construction of a refinery in Gdańsk. The competent ministers were authorised to enter into a ten-year crude oil supply contract with British Petroleum, providing for annual deliveries of 3 million tonnes of oil for the future Gdańsk Refinery. The funding came from long-term foreign loans (licences, documentation, plant and equipment) and own resources (construction and assembly work). The decision was approved and signed by the-then Prime Minister Piotr Jaroszewicz.

Where frogs once croaked

In April 1972, the workers from Mostostal, a construction enterprise of Płock, appeared on the fields of Płonia Mała. This depressed wetland, where frogs croaked and storks waded through shallow water, was to become the site of a great chemical plant, the second largest investment project of the time in Poland, after the Katowice Steelworks. The cost of the project was put at PLZ 12.3bn. Completion of the construction phase was scheduled for July 1975, and the start-up of the Fuel Unit was to be performed in November of the same year. The design work started in 1972. The front-end engineering design  was commissioned from Snamprogetti, an Italian design and engineering company, which was also responsible for procurement of plant and equipment. The technical drawings were prepared by the Oil Industry Design Office of Kraków as well as by Prochem, Naftoprojekt, Energoprojekt, Proat and other design offices. The general contractors on the project were  successively Mostostal Płock, Petrobudowa Płock and Gdańskie Przedsiębiorstwo Budownictwa Przemysłowego.

The site selected for the future plant had to be drained. Nearly 80 km of drainage pipes were laid, 1,000 wells were drilled, and approximately 270,000 cubic metres of peat and silt were removed. Over 2m cubic metres of sand and gravel was brought. All this was done to lower the ground water level and raise the land level by some 1.5m on average. About 8,000 reinforcing piles were driven into the ground, some of them 24 metres deep.
At the same time, an enterprise under the name Rafineria Nafty Gdańsk w Budowie (Gdańsk Oil Refinery under Construction) was formed. Its first headquarters were in old residential buildings leased from Gdańskie Zakłady Fosforowe (a phosphorus fertilisers plant).

The refinery's logo (RN) was created in 1973, based on the idea of Marian Raganowicz, an employee of the Investment Service.

The assembly of the power system and the Fuel Unit commenced in 1974. 1975 was a period of intense work to assemble the production systems and equipment.

The first delivery of crude oil

The first supply of oil for the refinery was brought from the United Arab Emirates by the Kasprowy Wierch tanker, but the first batch was unloaded into the refinery tanks from the Pieniny II tanker. The unloading started at 6:37 p.m. on August 7th 1975. The crude was simultaneously pumped into three storage tanks: S-3, S-4 and S-5. The direct unloading from the Kasprowy Wierch tanker began on the following day.

Development of the plant

In July 1975, the Administrative Centre and an outpatient clinic for the refinery employees were placed in operation. A month later, the Dispatching Service was launched. The first dispatchers were Bogdan Kokocha, Józef Mazur, Bogdan Piskorski, Jerzy Wesołowski and Zbigniew Woźniak.

Operation Steam, or the start-up of the power boilers and injection of steam into the plant system, marked the completion of the construction and assembly work and the comprehensive tests of the particular units. In July 1975, the mechanical and chemical parts of the refinery's water treatment plant were placed in service, and a year later its biological section became operational. On November 29th, crude oil was fed for the first time into the Atmospheric Distillation Unit, and the  cold run  started. After certain minor defects were removed, oil heating and the distillation process commenced.

The first refining product, gasoline, was produced in the morning on December 12th. A few hours later, kerosene and Diesel oils were obtained. The start-up of the key refinery units – the Atmospheric Distillation Unit and Gasoline Stabilisation Plant – commenced. Fuel oil, the first commercial product, was obtained on December 15th 1975.
Initially, the products were shipped by sea, as the infrastructure for railway transport was not ready yet. The first batches of fuel oil (13,000 tonnes) were loaded onto the Beskidy tanker on December 19th 1975. By the end of 1975, 132 tonnes of Zakum oil, imported from the United Arab Emirates, was processed .

In 1976, intense assembly work continued at the Fuel Unit, on the "catalytic systems complex". Its key part was the Catalytic Reformer Unit, constructed under licence from Amoco.  August  1976 saw the launch of production of motor gasolines:   Etylina 94 and Etylina 78. At the same time, further assembly work was carried out at the Oil Unit. On February 11th 1976, the Vacuum Distillation Unit was started up. A day later, the first vacuum distillation products were transported to storage tanks. The next to be launched was the Bitumen Oxidation Unit, with the first batch of D-70 road bitumen produced on April 4th. One by one, further parts of the Oil Unit became operational.
On July 1st 1976, the enterprise was renamed Gdańskie Zakłady Rafineryjne.

Completion of the construction phase

Following completion of the construction work, the plant entered a new phase of its development, which involved mastering the difficult technologies and improving the production processes.

History of the refinery 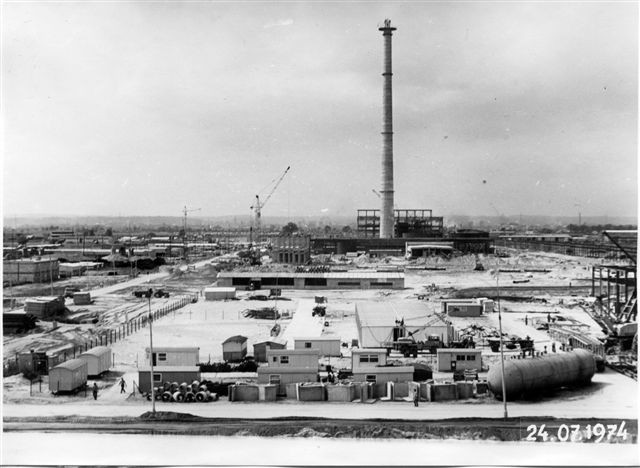 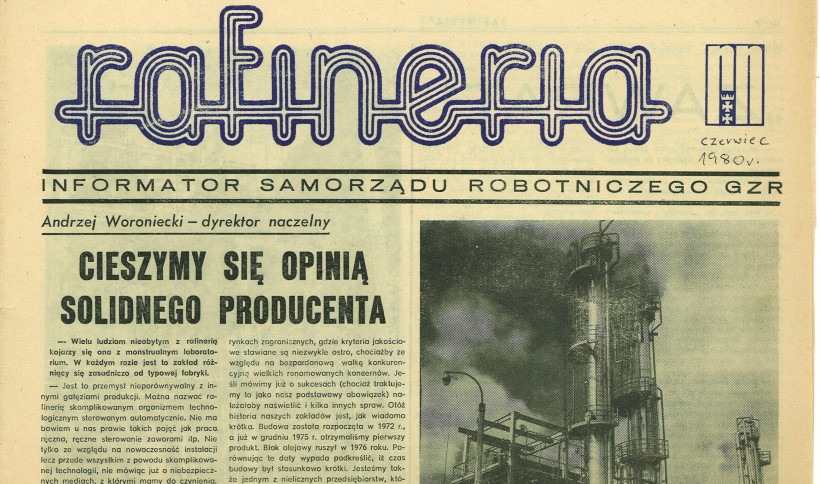 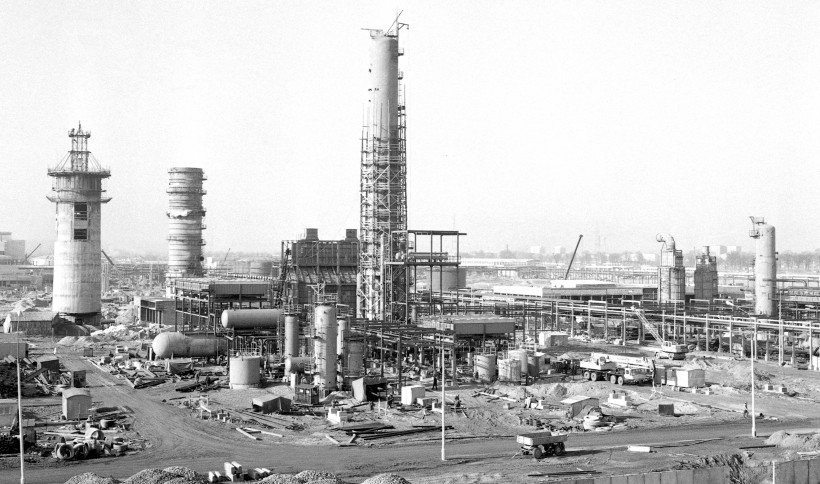 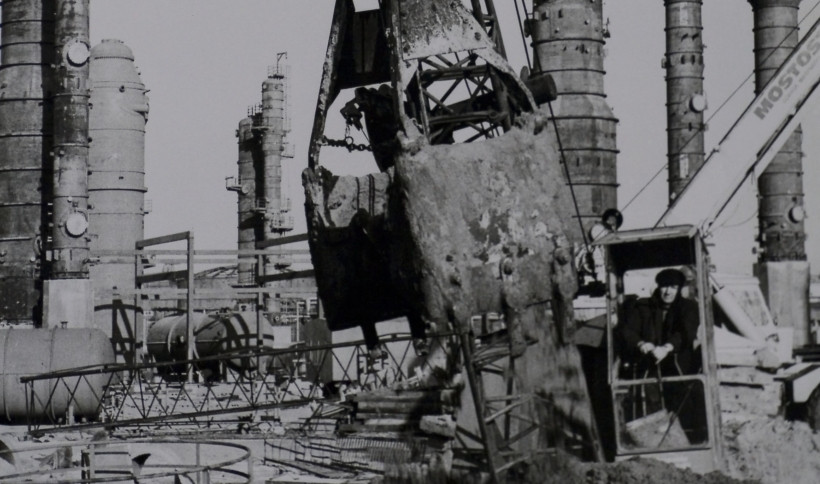 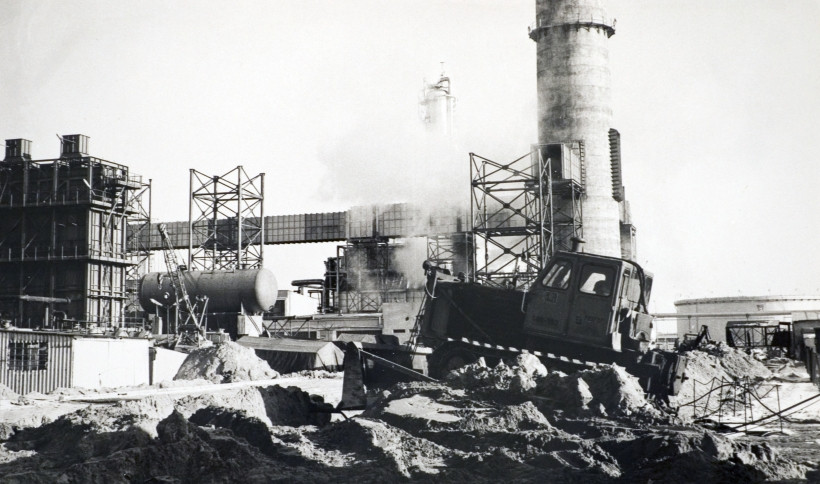 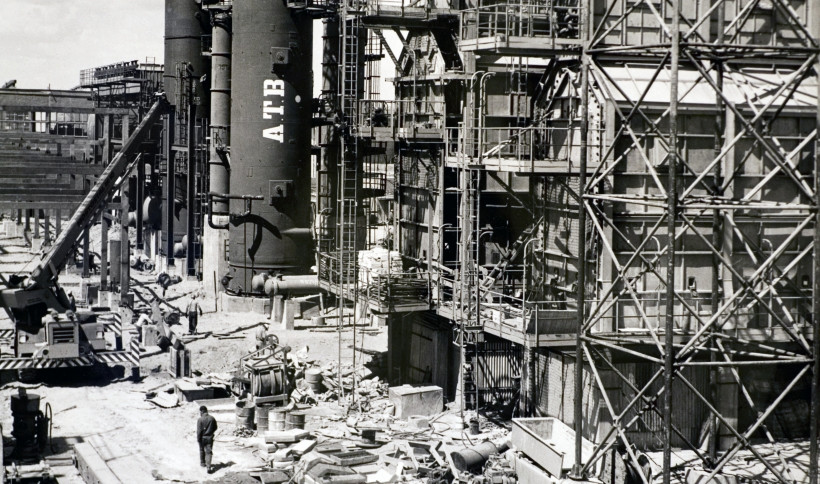 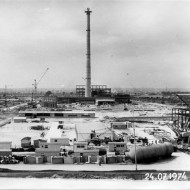 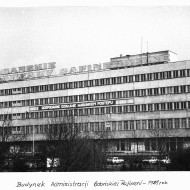 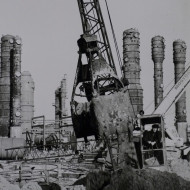 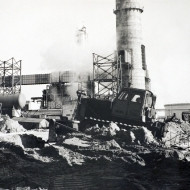 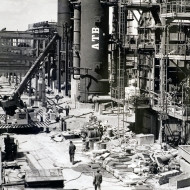 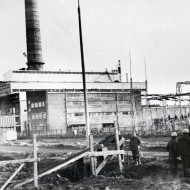